Entando simplifies the process for enterprises looking to modernize across on-prem and cloud infrastructures with native support for Javascript app development, micro frontend and microservices architecture, deployment of apps in scalable containers, and automated management of containers with Kubernetes.

This document explores the architecture of the platform and some notable runtime characteristics.

The Entando App Engine is the heart of the Platform, providing the primary out-of-the-box services for developing applications. Key features:

The Entando App Builder is the feature-rich user interface to design and build pages, manage content, and utilize the component hub for building applications.

The Entando Component Generator is Entando's implementation of JHipster (opens new window) that allows users to quickly and efficiently generate the skeleton of an Entando Component. The generator provides advanced data modeling capabilities, including object relational mapping and automatic generation of micro frontends and microservices. The generated skeleton serves as a starting point to help a development team swiftly meet the needs of the business.

The Entando Component Repository is used to store and retrieve shareable components so they can be used in multiple Entando applications across an enterprise.

Entando Identity Management is the Keycloak- (opens new window) and token-based authentication mechanism used by the Platform. With the ability to add Single Sign On capabilities across multiple domains, it connects service providers with identity providers.

The Entando Web Content Management System (WCMS) is a lightweight content and digital asset management system with support for headless operations. It manages widgets, html fragments, and other content types to be used in an application.

The following is an overview of the members of an Entando cluster and their roles.

# Architecture -Members of the Cluster

This picture of an Entando cluster shows how the various citizens interact with each other. Most of the citizens have a Custom Resource Definition file associated with them. They are deployed on Kubernetes, through the Entando operator and controllers.

The EntandoApp is composed of three parts:

The interaction between these three components, and the rest of the cluster, use the authorization/authentication features provided by Keycloak.

The Entando Component Manager lists the EntandoDeBundles accessible from the EntandoApp and provides the install/uninstall/upgrade/downgrade services to manage a bundle. The K8s service communicates with the cluster to provide these services. It is the only service, other than the operator, that can interact with the cluster and the required custom resources.

The Entando Kubernetes integration service is part of the cluster infrastructure custom resource. It provides an access point to some of the custom resources defined by Entando, in particular:

Some of the main services provided by the Entando Kubernetes service are:

Keycloak is responsible for authorization and authentication on Entando. All members of an Entando cluster interact with Keycloak to verify user/service authorization in performing any task. More details on Keycloak are below.

# What is an Ingress?

An ingress is a Kubernetes resource that exposes HTTP and HTTPS routes from outside the cluster to services within it. Traffic routing is controlled by rules defined on the ingress resource.

# How Ingresses are used in an Entando Cluster

When deploying a cluster, ingresses are generated for the resources that require exposure to the outside world. The Entando Operator and custom resource controllers create the ingresses and set the correct routes and certificates.

A dedicated ingress is created for Keycloak to expose the authentication and authorization functionalities. This is required to guarantee that both token issuing and validation work correctly, even when the services using the Keycloak instance are in different namespaces.

An ingress is automatically created to expose the App Builder, App Engine and ECM. The three containers are served under the same domain. This is beneficial since they are able to interact without cross-origin issues.

The EntandoApp ingress is also used when linking a plugin with an EntandoApp, which occurs when a bundle containing the plugin is installed via the ECR.

Plugins are automatically exposed via an ingress when deployed in an Entando cluster.

This table lists the default routes exposed for each ingress.

Note: The Entando plugin variable ingressPath is defined in the plugin custom resource under the spec element. The plugin ingress path is also used to expose the plugin within the EntandoApp domain.

# Exposing Plugins in the EntandoApp Domain

Exposing a plugin under the same domain (ingress) of the EntandoApp is done through the EntandoAppPluginLink custom resource and the corresponding controller.

This allows micro frontend developers, who need access to the plugin, to disregard CORS policy and the full path where the plugin is exposed. The plugin can be referenced using relative URLs.

# How to Check Ingresses in My Cluster

On the OpenShift dashboard, ingresses are not exposed directly as pods and deployments. The dashboard provides direct access to the ingress routes under the Applications → Routes menu. 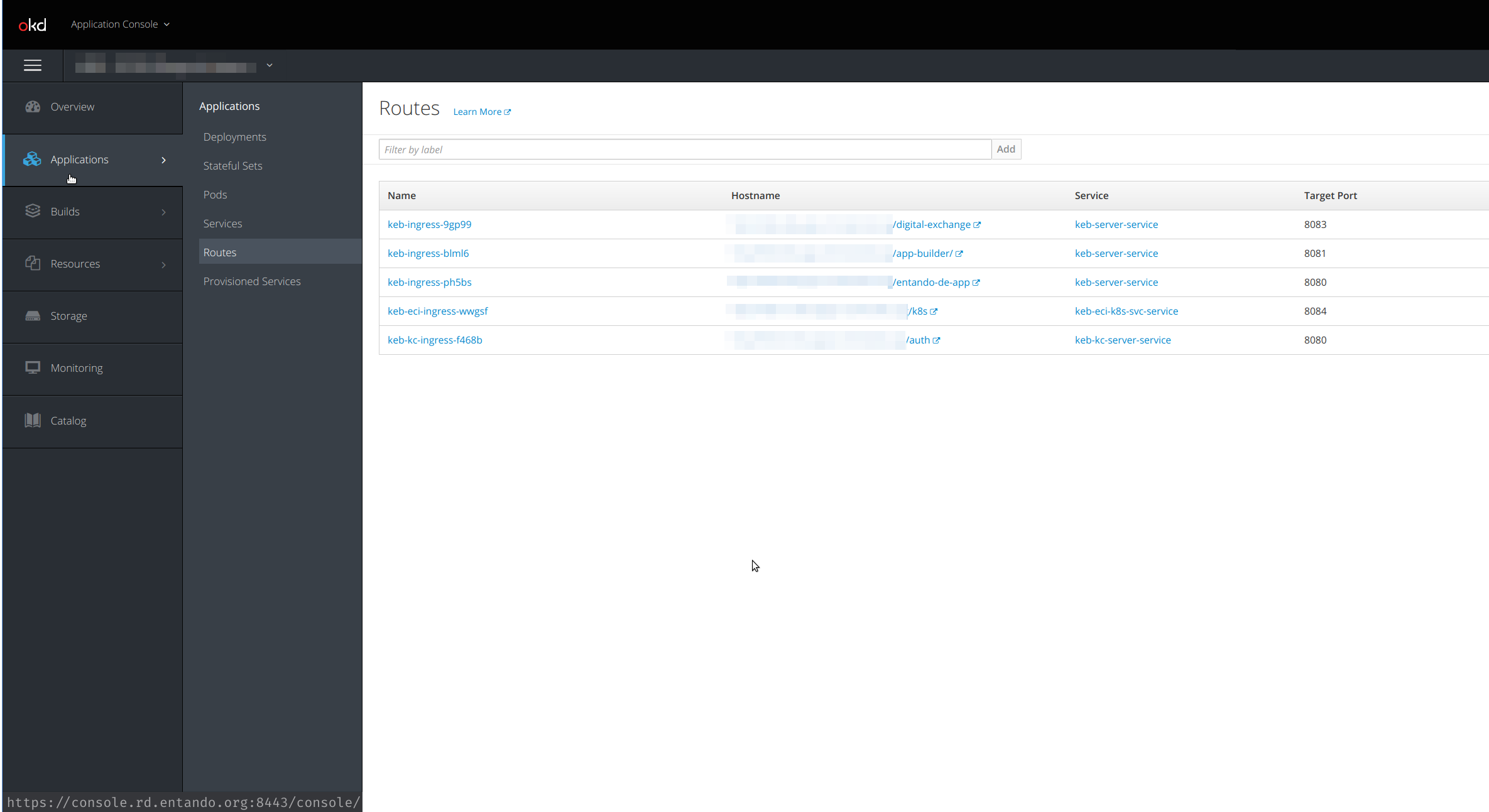 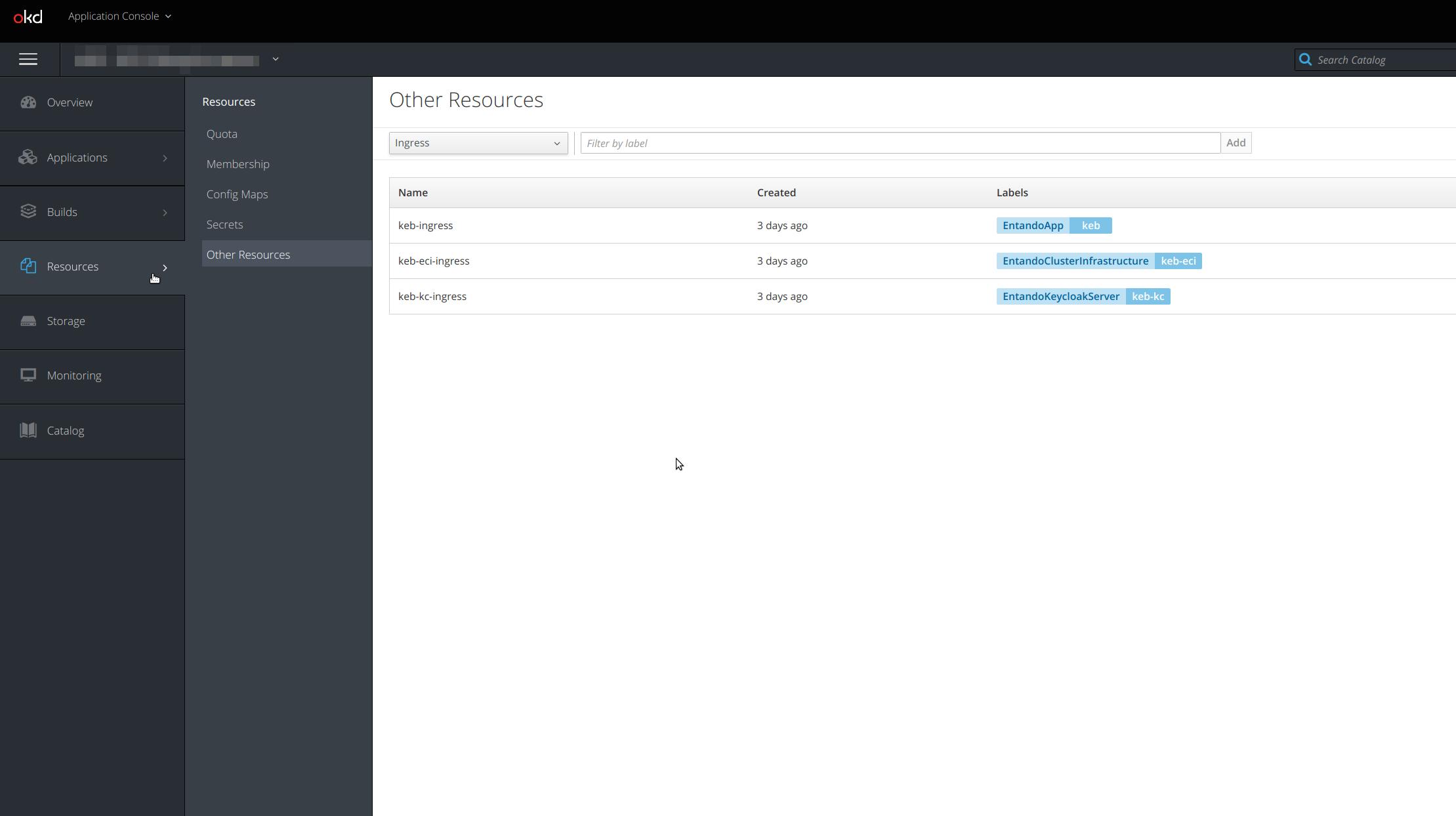 # Using kubectl from the Command Line

Once you know the namespace(s) where your cluster is deployed, use the following command from the command line:

Here is an example of the result in a test namespace:

For more details about a specific ingress, use the get command, specifying the ingress name you want to check and the yaml output format.

For more details about ingress concepts in Kubernetes, please refer to the official documentation: